A sauna experience is one of the healthiest things you can do for your organism. As with any process by which it releases substances to the outside—whether it be urination, defecation, expectoration, regurgitation, lacrimation, or my personal favorite, ejaculation—perspiration is yet another means by which the body says, “Get this stuff out of me NOW!”, purging itself of toxic substances (except semen, and even that sometimes…) and keeping itself in top condition. Don’t you feel better after any of the aforementioned processes? That’s because you’re supposed to. The skin is the largest and most complex (after the brain) of the body’s organs and it never stops working to our benefit. Indeed, a few hours of total pore blockage would mean death to the clogged soul whose perspiration has no escape. A less fabulous demise than skin suffocation is difficult to imagine. 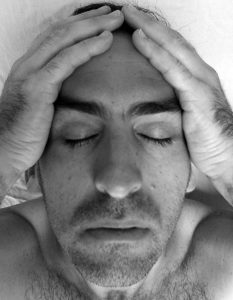 Normal sweat is more than water. Odourless in the absence of bacteria, it nevertheless carries uric acid and other unwanted substances out of the body via the sweat glands, of which there are two types. The eccrine glands are the ones which respond to heat; their job is to regulate body temperature by inducing evaporation of liquid transported to the exterior surface. The sweat glands located in the palms of your hands and the soles of your feet are also eccrine glands, but they respond more to emotional stimulation than temperature, a vestige of times past when we Cro-Magnons needed a good grip for climbing and good traction for running away from the beasts pursuing us—or after the beasts we pursued. The other kind of sweat is a sweetly aromatic musk produced by the aprocine glands located in the armpit and genital region; it serves a more sexual than evaporative role and responds to emotion rather than temperature.

A sauna is like a turbo-charge to your sweat engine; it allows the job of perspiration to take place with much less effort from the body, facilitating kidney function by utilising the skin as an overheated expressway to drive toxic substance out of the body. Supposedly, 15 minutes in a sauna rids the body of the same amount of waste the kidneys would need 24 hours to filter—quite impressive. What exactly are these substances cast off by the body? Lactic acid, for one—that’s why it is beneficial to take to the steam after a workout; get rid of the lactic acid and you will be fresher for your next exercise session. Urea, the basic component of urine, is also expelled via the skin–quite efficiently, too. And all those toxic metallic substances taken in from our polluted environments, such elements as lead, zinc, copper, and even mercury, are also expelled. All these compose the one percent of perspiration that is not water.

Sauna, a Finnish word, refers to the ultra-hot wet or dry spaces in which people can elevate their body temperatures, simulating the effects of fever, a physical state of repair and restoration for the human body. Work feverishly…get it?
Though we use a Finnish word, bathing in heat has its origins in Central Asia (just as the Finns themselves do) and this is why we still see to this day the great popularity of hammams in Islamic cultures as well as saunas in Scandinavia where it became an antidote to the bracing climate. Native American cultures, also believed to originate in Asia, also used hothouses as an enhancer of physical wellbeing.

Ions plays a role, too. As we know from reading the labels of our Clarins and Lancôme products, positive ions and free radicals are enemies of the state of health and are to be replaced by negative ions whenever possible. Evidently, the woodsy steam of a sauna releases a profusion of negative ions by throwing water on the hot rocks in the corner, initiating the feel-good feeling and the afterglow effect you are supposed to feel when in the heat for an extended period.

For thousands of years, sauna was a happy part of everyday life for

people all over Europe, until the religious holier-than-thous decided that people were having too much fun with too little clothing and slowly but surely reduced the presence of sauna through misinformation and accusation. Some things never change. Luckily, northern Europeans, more favourable to knowledge than edict and perhaps more secure with themselves than other cultures, for the most part disregarded the Church’s misguidance and kept right on steaming their buns as they pleased, though public bathing elsewhere in Europe became much less common. To this day, saunas are found in almost every health club, community fitness centre, and halfway decent hotels, and in many homes as well.